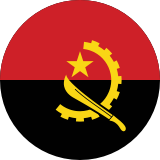 Cheap Calls to Angola with Yolla

Need to call Angola from the USA, Canada, Australia or any other country? We’ve got you covered! Simply download the Yolla app for Android or for iOS and make HD-quality calls to Angola at the cheapest rates possible or even for free. Here’s a short guide on how to do this:

Or just scan this QR code with your Android/iOS device and get the app in a blink!

To make cheap calls to Angola or other countries abroad you’ll need to verify your mobile phone number and get some Yolla credits. Don’t worry, you can cancel your payment at any moment! And if you have any issues with calling Angola or any other country, Yolla Support will be there to help and make it up to you 24/7. Invite friends to Yolla to earn free credits. Open Get Free Credits (side menu of the Yolla app on Android or Gift button on iOS) to invite your friends. Once your friend makes their first payment, you both receive an extra $3 for free!

Now you are ready to talk with someone in Angola – just pick a number from your contact list (it can be either a mobile or landline phone). Or you can dial any Angolan phone number using the Yolla dial pad. If you choose to enter the phone number manually, don't forget to dial the country code +244 for Angola. Have a great talk!